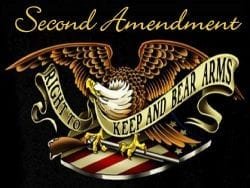 Congress is not hiding their desire to eliminate guns from law abiding gun owners and they are doing it by submitting and passing bills into law that will shred the power of our Second Amendment. Our forefathers thought so highly of the right of citizens to own guns to protect themselves but ultimately to protect themselves from a government that had become too powerful, controlling and basically, out of control that they included protection of that right in our Bill of Rights. It is quite clear that the foresight these incredibly brilliant men had was prescient. It is also quite clear today that with our government continuing its war on Police, ICE, Border Patrol and its overzealous urge to minimize sentences and to reduce the prison population, we need to be able to protect ourselves, families and properties. Without being able to legally own guns and ammunition, this task will be much more difficult.

Gun owners, or just people who agree with the second amendment, must first be aware of what Congress is doing to our right to bear arms but more importantly take action to ensure their actions are held in check. There are groups like the NRA,USCCA, NAGR and SAF are working overtime to defend our gun owning freedoms but like guns themselves, these groups are under attack and need our support. We need to be aware of the bills in the system, who is supporting them and then we need to take steps to let our voices be heard that we will not let our rights be impeded or stripped.

There are currently 110 gun related bills that have been proposed since January. That is not a typo…..110 bills related to guns or gun control. Let’s look at three bills currently working their way through Congress.

H.R. 8 and H.R. 1446 which have both passed in the House and are now headed to the Senate involve strengthening Background Checks, which most people are in favor of but, these bills would increase times for checks from 3 days to 10 and would require FBI Background checks on private sales of legal firearms or the passing down of firearms within a family. None of these are necessary or have been shown to have an impact on gun violence and are simply a step towards additional controls.

H.R. 127 is much more complex and its reach more extensive.

HR 127 establishes a federal firearms registration system that will be accessible by federal, state, and local governments, including the military – even the GENERAL PUBLIC! The system will track the make, model, and serial number of all firearms, their owners, the dates they were acquired, and where they are being stored.

This bill is a violation of so many privacy rights it would take another post to cover them. H.R. 127 also contains the following:

None of these restrictions on legal gun owners have shown to have any impact on crime or homoicide but they are again steps to control and eliminate legal guns in America. Mind you, illegal guns are not restricted by these laws!

During the 2020 campaign, Joe Biden promised a long list of gun control regulations. There is a reason that Michael Bloomberg spent $125 million helping Biden in Florida and something over $600 million nationally in the general election.

The agenda includes: classifying many semi-automatic rifles and magazines holding more than 10 bullets as Class 3 weapons (which can require nine months or more for approval and a $200 fee), national gun licensing, “red flag” laws that let judges take away people’s guns without a hearing, background checks on the private transfer of guns, and bans on some semi-automatic firearms that happen to look like military weapons.

We must be aware of these bills, make sure your fellow gun owners are too and most importantly we must let our elected officials know where we stand and we must work to elect representatives who believe in and will protect our Second Amendment. The assault on our Second Amendment is wrong, it is dangerous and it is unAmerican. We will not let it happen.