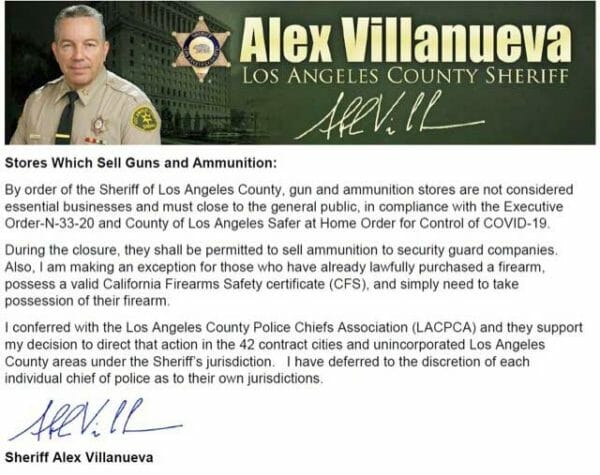 U.S.A. –-(Ammoland.com)- The Sheriff of Los Angeles County in California, Alex Villanueva, has backed away from his emergency order closing gun stores. This is the second time he has done so. This time he gives the Trump Administration the credit for opening the stores. From ktla.com:

He said the move was prompted by memorandum issued by the U.S. Department of Homeland Security on Saturday that designated workers supporting the firearms and ammunition industry to be “essential infrastructure” workers.

“Based on further input from the federal government, the Los Angeles County Sheriff’s Department will not order or recommend closure of businesses that sell or repair firearms or sell ammunition,” Villanueva said in a written statement.

The sheriff said that while the Department of Homeland Security guideline was an advisory only, “…nonetheless, the federal memorandum is persuasive given the its national scope.”

Then the Count Council ruled that gun shops are essential.

Then on 25 March, 2020, Governor Newsom refused to clarify whether he believed gun stores were essential or not.