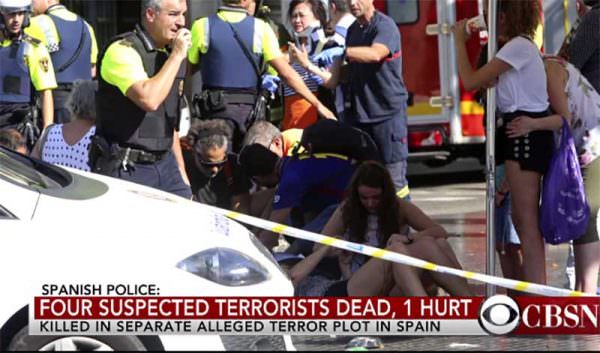 Ft Collins, CO –-(Ammoland.com)- Competence, combined with devotion to duty, saves the day, and the future!

Friday, in the midst of grief following the Barcelona truck-attack, a second vehicle-attack ended abruptly in nearby Cambrils, Spain, when a single armed and well-trained LEO carried the fight to the enemy and, using his issued pistol, decisively shot four terrorists (who were all wearing mock explosive-vests, now apparently their MO).

All four were DRT! (dead right there )

A fifth was also shot, but not fatally. He was taken into custody.

Just hours after the Barcelona truck-attack, one innocent woman was murdered, and several others injured, in the coastal town of Cambrils, Spain, when five Islamic terrorists rammed their Audi sedan into a crowd of people on the shoreline.

An axe and several knives were found in their vehicle. Not difficult to guess what they had planned!

Unfortunately for the terrorists, police were nearby, and didn’t hesitate!

In the space of a few seconds, these courageous police officers permanently eliminated a continuing, pernicious threat to public safety!

Who says pistols, in the hands of good and competent …Read the Rest