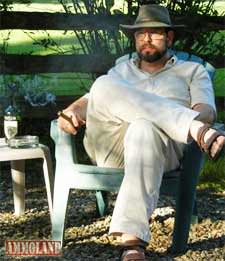 USA – -(Ammoland.com)- “Robinson blood has been spilled in every war since WWII,” Nancy Oakley reported Saturday, describing some patriotic family members at Boston’s Free Speech Rally who were interviewed by Oath Keepers founder Stewart Rhodes (see video below). Representatives from the group of current and retired service members, police and first responders offered a deterrent presence to threatened violence by ANTIFA agitators against citizens standing up for the First Amendment.

“They tell how they feel about ANTIFA burning the American flag while flying the communist flag, and discuss what it means to be willing to ‘lace up their boots’ to defend this nation against all enemies, foreign and domestic,” Oakley explained. “Sr. Robinson Served as an 11B in the 24th Infantry Division, and his son Charles Robinson III served as an 11B in the 1st Infantry Division (Big Red One) in Iraq.

“The father’s statement on how his family will ALWAYS answer the call, and how he raised his sons to be willing to die on their feet rather …Read the Rest