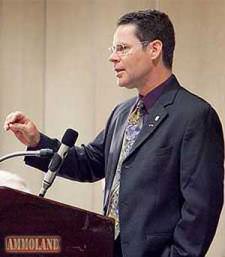 USA – -(AmmoLand.com)- Pandemic April 2020. A man is cited for riding a paddle-board off the coast of California. A father is “detained” for playing catch with his daughter in a city park in Colorado. Police in Kentucky record license plates of cars in church parking lots on Easter Sunday. Businesses are ordered closed around the country, and in some places, “non-essential” items (like gardening supplies and child safety seats) in large department stores are cordoned off and forbidden to be sold.

And of course, gun shops and ranges in many areas have been ordered closed and off-limits.

Around the country, governors, mayors, sheriffs, and other officials, have instituted highly restrictive, blatantly unconstitutional orders. In too many cases, those orders are being actively enforced by police, and in some cases, the National Guard.

The Governor of Rhode Island banned visitors from New York and called out the National Guard to help man checkpoints on highways into the state. When New York Governor Andrew Cuomo threatened to sue Rhode Island for targeting New Yorkers, the RI Governor shifted the policy to ban travel from any state. He doubled down by having officers drive through neighborhoods and go door-to-door …Read the Rest