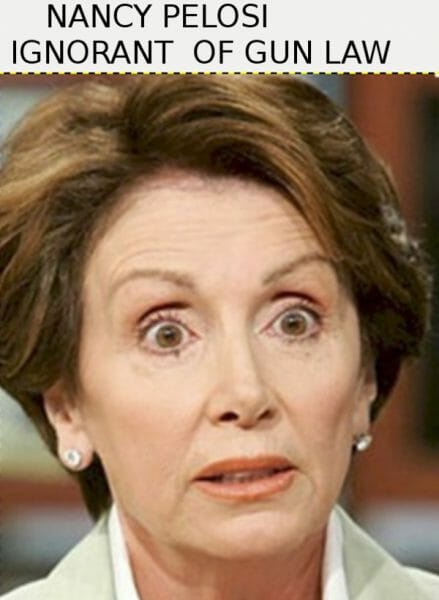 Arizona -(Ammoland.com)- Nancy Pelosi is ignorant about the state of gun laws. It is not surprising. Many people base their decisions about guns and laws on ignorance. It is possible that she is lying.

I suspect ignorance. Most Progressive decisions about guns are made from false assumptions about reality.

Once those assumptions have been internalized, there is no need for further thought or learning about guns and gun laws.

Those decisions have already been made. The assumptions are obvious in the following statement from Nancy Pelosi.

“Far from making Americans safer, this deadly, extreme Republican bill would make it legal for more dangerous and untrained people to carry loaded, hidden guns in more public places and would inexplicably try to make the weakest and most dangerous state concealed-carry laws the law of the land in all 50 states,” she said.

The assumption is that more guns in public places make those places more dangerous. She does not need evidence to support her assumption. It is an assumption, an article of faith, something that is intuitively obvious to her.