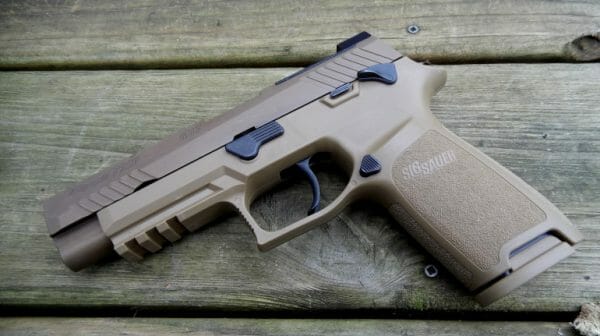 U.S.A. –-(Ammoland.com)- The fighting guns of the United States Army holds a special significance to nearly all groups in our country. Some despise them and others hold them in reverence. In the gun world, we tend to do both, but for our own reasons. Today we are looking at the civilian version of SIG SAUER’s M17.

When the P320 series was first released, it was met with some criticism. The negative press continued for several years as the design was put through other trials and a great deal of scrutiny. I remember there was even a bit of un-ironic laughter in some of my writer’s circles when the P320 design was entered into the Army’s XM17/18 MHS competition. It was believed that another brand of pistol, long a favorite of tactical and military groups, would handily win.

Yet, for all the damage and poor coverage, SIG emerged victoriously and their gun was officially dubbed the M17. Almost immediately there was a flurry of outrage, lawsuits, and general disbelief which shamed the community at large and brought dishonor to the names of those in denial about the Army’s choice.

The infantile repudiation of the new M17 came …Read the Rest