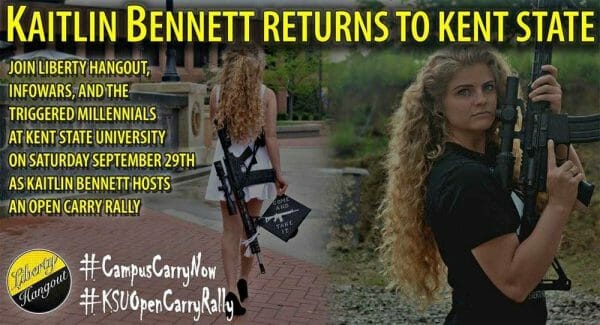 What happened in the days after the picture was outrage from the “tolerant left.” Instead of having her voice silenced by those anti-gun fanatics on the left she fought back by embracing her new notoriety to organize pro-gun rallies. Each rally she holds gets more prominent, and the resistance towards these rallies by the left gets more underhanded.

Recently Kaitlin’s GoFundMe efforts to raise money for security and speakers for the Second Amendment rallies have been targeted by Antifa and other groups. They successfully petitioned GoFundMe to pull down her fundraising efforts, but Kaitlin plans to carry on her efforts.

I had a chance to speak to her about the controversy surrounding her picture, and her rallies.

John: What made you decide to take the picture with your AR-10?

Kaitlin: I decided to take my graduation pictures with an AR-10 to protest Kent State University’s policy that prohibits students from protecting themselves with a firearm on campus but allows guests. I find …Read the Rest