How Anti-gun Movements Drive Up Gun Sales and Ownership 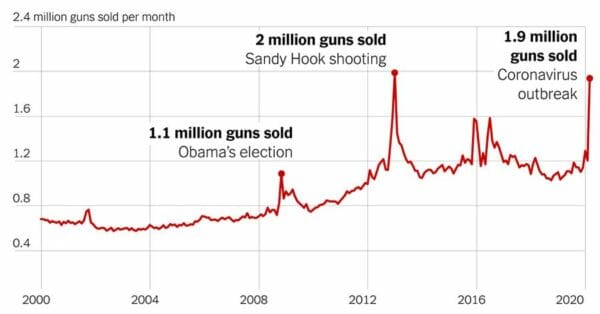 U.S.A. -(AmmoLand.com)- While the chart is impressive, the actual numbers tell the details of gun sales. In 2001 with George W. Bush as President, gun sales were 8.9 million. In 2019 gun sales were 28.4 million. That’s over 300% increase in gun sales. It is driven almost entirely by the fear of confiscation and guns being banned. When “W” was President, gun owners felt safe from confiscation and gun bans. Overturning the Clinton gun bans was one of the reasons Bush was elected. Had liberal gun grabbing democrats not pushed their agenda, there would be 200,000,000 fewer guns in America and 50,000,000 fewer gun owners. The net result is Donald J Trump winning the Presidency in 2016. So, THANK YOU! Gun Al Gore lost his home state of Tennessee when he called for a universal ban on handguns, and with it the Presidency in 2000.

Hillary Clinton lost Michigan, Pennsylvania, and Florida after calling for the confiscation of AR patterned rifles in 2016, and will now never be President. Barack Obama took a pass on gun confiscation and won the Presidency twice.