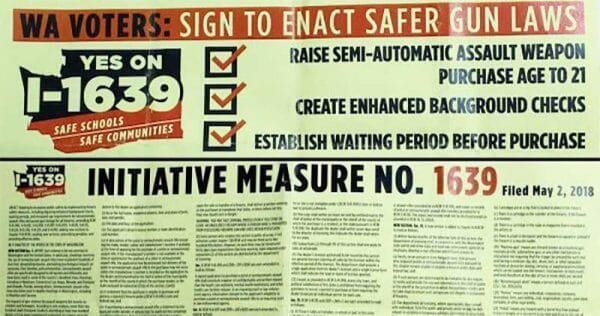 BELLEVUE, WA – -(Ammoland.com)- The Second Amendment Foundation and Citizens Committee for the Right to Keep and Bear Arms recently asked the Washington State Supreme Court to invalidate Initiative 1639 and enjoin the Secretary of State to reject the petitions on the grounds that petitions circulated by paid signature gatherers failed to meet state requirements for readability nor did they include a “full, true, and correct copy of the proposed measure printed on the reverse side.”

“We publicly warned the initiative sponsors about these problems and they ignored us,” said SAF founder and Executive Vice President Alan Gottlieb. “We are now taking the issue to the state high court to seek a declaratory judgment and injunction.

“During the signature gathering process,” he continued, “we were contacted by several people who were alarmed at the unreadability of the text, and also because they could not really tell what changes they were being asked to make to existing law. The microscopic maze of fine print used by the initiative sponsors disguised the actual language of the measure on the back of their …Read the Rest