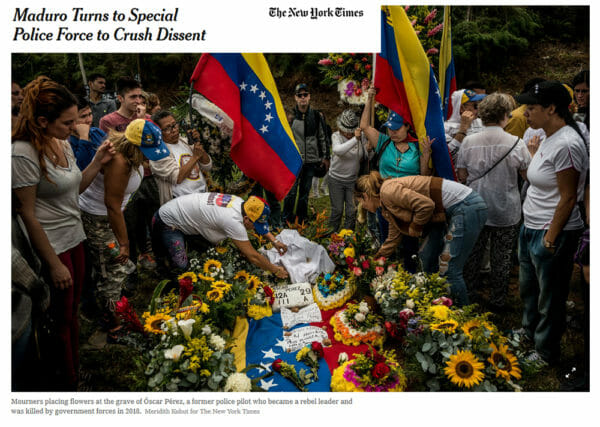 On Sunday January 27th, eighteen-year-old Yonaiker Ordonez was murdered in the middle of the night by “FAES” agents in Venezuela, under the direction of Marxist strongman, Nicolas Maduro .

FAES “agents” (aka: “nationalized thugs”) kicked-in the door of Ordonez’s family’s home (no warrant, no warning), dragged Yonaiker away, and shot him to death minutes later.

Ordonez’s only “crime” was that he attended a public protest several days earlier and was apparently identified there by members of Maduro’s constabulary of “special informants.”

They are capable of “crushing dissent,” only because they know that targets of their infamous midnight raids have been previously disarmed, and are thus unable to fight back. Maduro’s FAES is merely a modern-day (and oh-so-predictable) variant of Stalin’s justly-feared, psychotically brutal NKVD.

All-too familiar tactics of wholesale “terrorizing” employed by the dreaded NKVD in the 1930s, and now by the Venezuelan FAES in 2019, are identical, which comes as a surprise only to naive liberal snowflakes, who never study history.

Absent any species of “due process,” both entities imprison (indefinitely, in modern-day …Read the Rest