by Harold Hutchison at CDN – 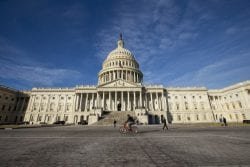 Tennessee Democratic Rep. Steve Cohen called for a ban on “assault weapons” during a Thursday congressional hearing on gun control. “The Second Amendment, like the first, is not absolute,” Cohen said during the House Judiciary Committee hearing. “The First Amendment, you cannot defame people. You cannot go into a theater …