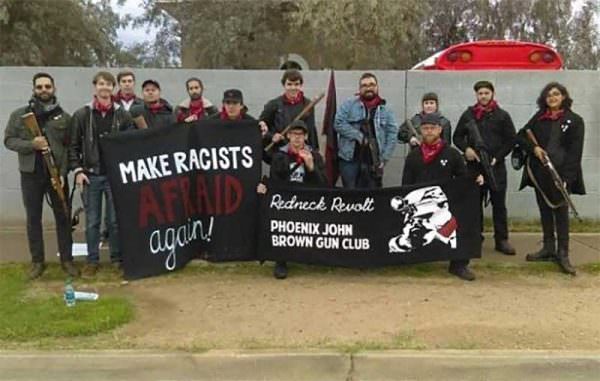 Many of America’s perpetually unproductive/unemployed neo-Communists, masquerading as “liberals,” have unhappily discovered that their hallmark bullying, threatening tactics, particularly at colleges and universities, are only effective when there is no resistance.

Recently, some of the other side have morphed into “hard targets,” and the left is horrified and simultaneously crying “unfair.” Apparently, they, and only they, have a sacred right to employ criminal violence against defenseless opponents.

Suddenly, the American left has “rediscovered” our Second Amendment, while they target white Americans!

After denigrating it, and all American gun-owners, for decades, and piously declaring that our Second Amendment needs to be repealed, leftists are now desperately arming themselves with real guns, exercising the very same Second Amendment rights they so self-righteously smeared just weeks ago!

They obviously want to be able to continue to scare, threaten, intimidate (and eventually murder!?) all who oppose them, much as did their spiritual ancestors, Bolsheviks, decades ago.

Fortunately, they perpetually lack the personal discipline and integrity …Read the Rest