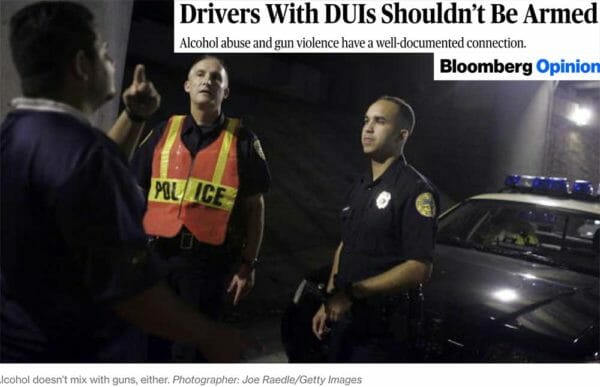 U.S.A. – -(Ammoland.com)- “The combination of guns and alcohol is especially dangerous, and far too little has been done to address it,” the Bloomberg Opinion Editorial Board hyperventilates. “Federal law doesn’t restrict access to guns by people with a history of alcohol abuse, and fewer than half of U.S. states impose prohibitions of this kind.”

You see where this is going. And to prove how “evidence-based” their conclusion of heightened danger is, the Bloombergians cite a 2013 “report” by “a consortium of leading researchers,” comprised of unbiased, honest brokers such as Lori Haas, Josh Horwitz, and Garen Wintemute.

No agenda in that “science”…

Then the editors cited a more recent “study,” one claiming “Handgun purchasers with a prior DUI have a greater risk for serious violence…”

“Suggests”? The …Read the Rest