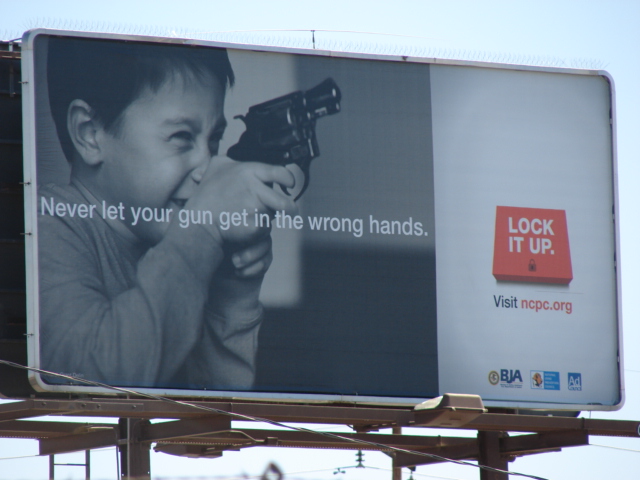 What’s wrong with this picture? It gives the impression that small children gaining access to firearms is a big problem. It isn’t. The number of children under five who die in firearm accidents each year is, thankfully, in the single digits. In a country of 313 million people and 347 million firearms, that is a remarkable safety record. So why the picture of a four-year-old with a revolver . . .

Simple. Shock propaganda aimed at the non-gun owner. An attempt to further demonize guns amongst the ignorant and antagonistic (or some combination thereof). If you dig into the campaign further, you’ll see the ad as an attempt to push gun owners to lock up their guns when “not in use.” The ad is couched in terms of in terms of “gun safety,” pushing the idea that all guns should be “locked up.”

The anti-gun agitprop was created by the “National Crime Prevention Council,” ye olde McGruff the Crime Dog folks, funded by the Bureau of Justice Assistance. It’s distributed by The Ad Council, a propaganda organ of the ruling elite thinly disguised as a non-profit; enabled by air time, print and billboard space donated by the mainstream media.