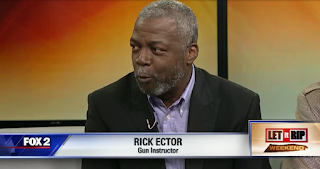 On Sunday, I appeared on Fox 2’s “Let It Rip Weekend” to comment on a recent story. In that episode, the issue at hand was the case of a young man who shot two police officers responding to a call for help at his home. Apparently, they were mistaken for a pair of criminals. Accordingly, a 19 year old man shot the cops through a man without verifying his target. On the show, we discussed the case. Listen to see my thoughts.
To watch the episode, click the following link: http://www.fox2detroit.com/news/let-it-rip/253324520-story

About The AuthorRick Ector is a National Rifle Association credentialed Firearms Trainer, who provides Michigan CCW Class training in Detroit for students at his firearms school – Rick’s Firearm Academy of Detroit.

For more info about free shooting lessons for …Read the Rest