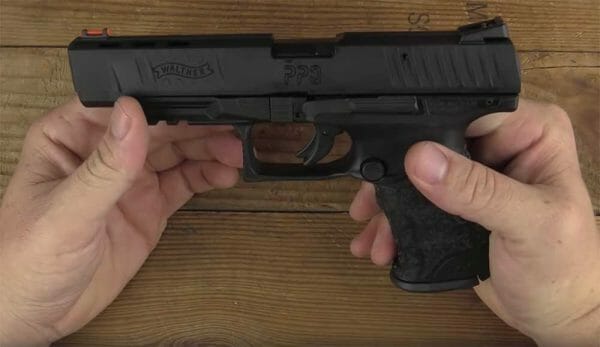 U.S.A. –-(Ammoland.com)- With the return of affordable and available .22lr ammunition we can return to training that doesn’t drain the budget. Increased round counts and decreased expenditures. The challenge is in finding a pistol chambered in .22lr that is similar enough to your full-size gun. Walther has something for their Q5 and Q5 Match fans in the form of the PPQ .22 5″

For a comparison and demonstration of just how similar this .22 pistol is to a regular 5″ PPQ see the tabletop comparison video below.

Although some details are unavoidably different such as the hammer-fired operation, and different capacity, the ergonomics and general handling is exactly like the 5″ PPQ. The PPQ .22 5″ even fits holsters designed for the full size PPQ. All of this makes for a great training gun. Perhaps the one fault would be in that the trigger doesn’t quite feel the same in that the reset is longer. Although longer, it’s still a Walther trigger and so quicker than most.

If you’re not a competitive shooter, but have larger hands, or …Read the Rest