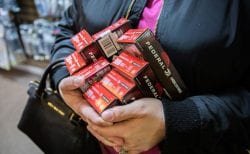 “Make no mistake,” the governor said. “If you are essential and open, you have a special responsibility to do the right thing.”

Northam’s guidance did not mention gun shops as either essential or nonessential, though he did list indoor shooting ranges as nonessential. He did not respond to a request for comment as to whether gun shops are considered essential.

Virginia gun shop owners told the Daily Caller News Foundation that Northam has a history of taking a stand against the right to bear arms. If Northam were to shut down gun shops, one said, this could infringe on Virginians’ Second Amendment rights.

“The Second Amendment says you shall not infringe,” Steve Clark, the owner of Clark Brothers Gun Shop in Warrenton, Virginia, told the Daily Caller News Foundation. “And that’s a simple definition.”

“Our founding forefathers were absolutely magnificent and incredibly smart and they didn’t write it in lawyer-ease,” he continued. “They wrote it so that regular people could understand it”

Wake County, North Carolina, Sheriff Gerald Baker announced Tuesday that he will suspend new applications for pistols and concealed carry firearms until the end of April because of an “unprecedented” demand for weapons. Conversely, Democratic Illinois Gov. JB Pritzker declared gun stores were to be considered essential.

Clark told the DCNF that “everybody has a different definition” of what essential means.

“I’m going to tell you what it is essential for is for my livelihood,” he said.

But gunshop owner, firearms instructor, and federal firearms manufacturer John Shepherd told the DCNF that he would understand if Northam closes gun shops “if it is necessary to stop the spread of pandemic virus” for “the sake of the country.” Shepherd owns Saddle Ridge Armory in Catlett, Virginia.

“That’s something that might be necessary,” he said. “I know that most Virginians, the majority of them already have firearms based on the numbers we’ve seen in the past two years,” adding that sales at Saddle Ridge Armory have gone up every quarter.

Shepherd referenced the serious situation in Italy and Spain where the coronavirus has wreaked havoc on inhabitants in these countries. While he can see why many would think that shutting down gun shops would be “an infringement,” people must think “big picture,” he said.

But Shepherd also noted that Northam does have bias towards Second Amendment rights and could potentially use coronavirus as an excuse to close gun shops as a “potential foot in the door to kind of curb firearm sales.”

Meanwhile, other Virginia gun store owners echoed Clark’s statements. Asked whether he considers his store to be essential, JC Firearms owner J.C. Grotenrath told the DCNF, “I consider people’s rights to be essential.”

“And if  grocery stores start to run dry, people start breaking into homes to take things,” he continued. “People have the right to protect themselves. They should be allowed to.”

Gun sales at JC Firearms have gone up dramatically, Grotenrath said. These sales have been largely those who don’t yet possess firearms and think, “I want to be able to protect myself,” the gun store owner said.

“Furthermore,” he added. “I feel a lot safer in a community where there’s more people who are armed ’cause it means there’s going to be less crime.”

Robert Hall owns Hall Precision and Gunsmithing in Spotsylvania County, Virginia, where he both sells guns and provides gunsmithing services.

“I would have that fall under the essential category there,” he told the DCNF.

“Hey, there are weapons out there that need to be serviced, maintained not just by the public, but by law enforcement agencies,” he said. “And we also do some contractors as well. So shutting them down would actually endanger the public safety more.”

Hall’s shop has seen a huge spike in sales stemming from panic over the coronavirus, “probably on a factor of nearly 10 times greater than what it would normally be,” he told the DCNF. Sometimes Hall sees spikes in sales after talk of anti-gun legislation or in the aftermath of a shooting, but he said that he has not seen anything like this in the last 15 years.

“I would say he would be putting the public more at risk,” Hall said if Northam were to shut down gun shops. “They’re going to have an increased distrust as a result of doing something like that.”

“I’m just talking to people in general on it already,” he continued. “It wouldn’t do much for him as far as people thinking of him being responsible or anything like that.”

Many people are concerned about their safety right now, he said.

“That’s why they’re buying the guns,” Hall told the DCNF. “So if they’re concerned on their safety and now to being told, ‘Hey, your safety really doesn’t matter and go to fend for yourself and hope for the best,’ it just makes the problem worse.”

The gun shop owner said his customers told him that they are buying guns because they’ve seen how people are behaving in stores over things as small as toilet paper. “They’re worried that it could get worse.”

“Some customers have actually told me they’ve had their neighborhood and their neighbors broken into and they stole nothing but those kinds of things,” Hall said, referencing store items like toilet paper that have become scarce due to coronavirus panic. “And they’re worried, where are they going to try next time, if they break in.”

Like fellow gun shop owner Grotenrath, Hall has also noticed that many of his customers are first time buyers. It’s a matter of self defense, he said.

“So, I’ve seen a lot of first time buyers coming in, they’re picking up a handgun, a shotgun, you know, it’s typical first time buyer type of things that they’re buying and saying, ‘Hey, I need something in case somebody breaks in and there’s no police around cause it was shut down.’”

Hall said he knows of several gun shops in his area that would continue to stay open and ignore such a ban from Northam.

“The only thing that would probably actually make us stop the sales would be if they took down that background check system,” he said. “‘Cause as long as that’s up, we’re still allowed to issue firearms to the people.”

“But besides that, yeah, we can still take orders,” Hall continued. “We can still hold guns for folks until it comes back up. We just wouldn’t be able to actually hand them to them.”

Should Northam decide to ban gun shops, Clark, the Warrenton gun shop owner, said he would probably get in touch with his lawyer and ask “How are they going to enforce this? What is going to be the penalties and how they define essential and non-essential?”

“Because if they’re making a list, I see a bunch of guys sitting around the table and they’re all brainstorming, ‘Well who do you think’s essential? Let’s think of this one. Let’s name that,’” Clark said. “And there’s going to be so many of them that they won’t even think of, so they won’t be able to decide who’s essential and non-essential.”

“And who gets to decide who’s nonessential and essential?” Clark asked. “That’s probably going to be illegal, whatever they come up with.”

Clark has a “whole lot of issues” with Northam’s regulations already, he said. The gun shop owner said some of Northam’s proposed gun laws are illegal, and that the governor has backed off some regulations because “he was getting a lot of push back on them.”