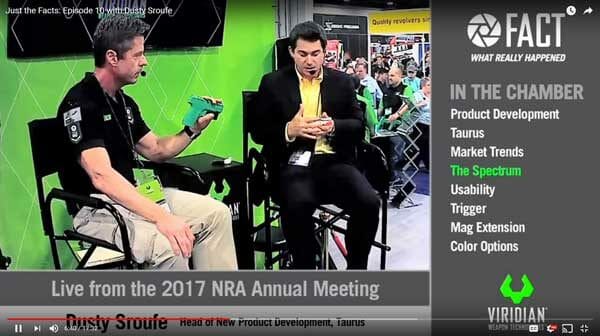 In the tenth episode, Viridian sits down with Dusty Sroufe, head of New Product Development at Taurus, to discuss his career, market trends, the new Taurus Spectrum and much more. Like all “Just the FACTs” episodes, the interview was filmed with FACT

Taurus Holdings, Inc. is a Florida-based company responsible for some of the most robust firearms brands in the U.S. market, including Taurus, Rossi and Heritage.

A global leader in revolver production, Taurus Holdings, Inc. is well known for great introductions like The Judge and Curve (which features an integrated light and laser from Viridian).

The company continues to evolve and produce affordable, high-quality firearms, many of which are compatible with Viridian lasers and lights.

“We work hard to build strong relationships with gun manufacturers like Taurus because collaboration is key to making better products for our customers,” said Viridian President and CEO Brian Hedeen. “In this episode, viewers will hear from Dusty—the guy behind the scenes at Taurus—to learn more about the Spectrum micro-pistol. Not only will viewers see the …Read the Rest