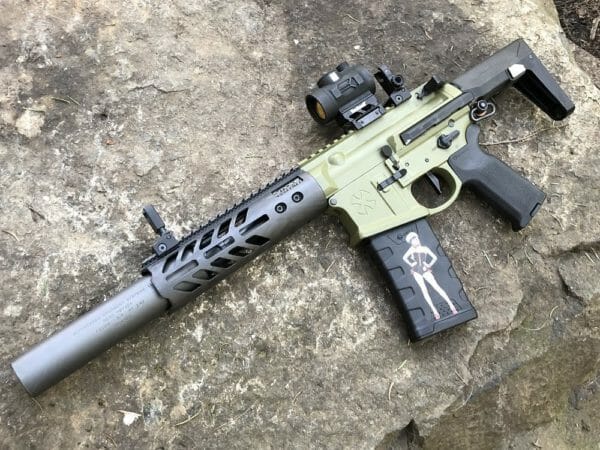 All of that would be enough to make the C4 Precision BUIS among the best ever. Ultradyne has gone further though and added a few additional refinements. First, the front sight doesn’t need a special tool to adjust elevation. Simple depress the spring-loaded protective “ears”, and spin the front post with your fingers. When you let the ears pop up again, they lock the front post in place. Easy! Second, the side-plate by which the C4’s attach to the top rail isn’t a standard 1913 side piece (which can be mistakenly affixed upside-down), it has a horizontal peg that only allows it to be affixed in the correct orientation. The third and final refinement may be the ultimate one. Both the front sight post and the rear aperture are easily replaceable with various options. Want a 10, 12 or 14 MOA opening in the front post? Or even a standard squared post? Available. Need to narrow the rear aperture from .07″ to .05″ for precision shooting? The option is there. With Ultradyne’s C4 Precision sights, you have many options at hand.

The Ultradyne C4 Precision BUIS are as simple to use as you’d expect. They really excel as a benchrest setup in their OEM configuration, giving a very precise sight picture and little else. I’m going to take some time to swap them over to a more “combat backup” oriented package and see how they fare in that role. While I don’t practice much with iron sights outside of maintaining proficiency, I can still keep ~2 MOA with the Ultradyne C4’s out to 200 yards, which is far better than with any other iron sights I’ve used. I attribute that to two things: 1. Being able to see the target through the front sight aperture and 2. Using the BDC adjustment on the rear sight so I’m not forced to hold over with the front sight (which would negate item #1).

The bottom line is that while back up iron sights (or even primary iron sights) have fallen out of favor in the last couple decades, they’re still the most durable and “Murphy”-proof option. It’s up to each shooter to decide how much emphasis (and budget) to put into their tried and true iron sights. One thing is clear to me, and that’s that Ultradyne’s C4 Precision iron sights are the most capable and well built in the industry, bar none. So if you’re looking for an upgrade, or finishing off your build, you’d be well-served checking these out. Precision doesn’t come cheap though, as Ultradyne’s C4 set (front and rear) run

U.S.A. –-(Ammoland.com)- It’s rare that I hear discussions on iron sights these days. Many talk about red dot sights versus low-power variables versus fixed power prismatic optics, but the old way is certainly being phased out. Strangely, every shooter I’ve ever asked has agreed that shooting with iron sights is a necessary skill, and most agree using irons should be learned before using other optics. Why then has so little aftermarket attention been paid to improving these basic necessities? Well, Ultradyne has been working to push the capabilities of the venerable old back up iron sights (BUIS) with their C4 Precision sights.

At first glance, the C4 precision sights seem to be pretty standard. On further inspection, they not only hit every benchmark for features, they push the line forward. They’re pop-up, with a solid locking mechanism. They’re sturdily constructed from 7075 aluminum and 4140 steel in the “HK” hooded style, with anodized and salt-bath nitride finishes to match. The rear sight has …Read the Rest