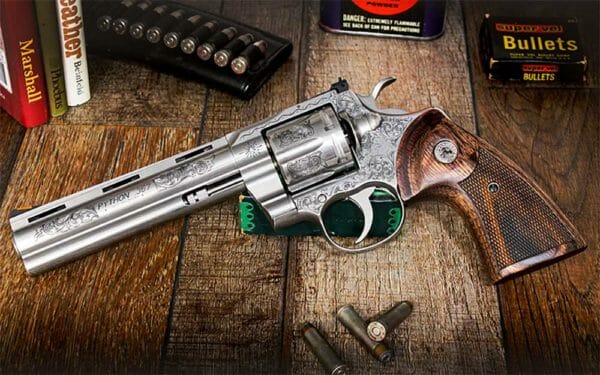 Texas – -(AmmoLand.com)- Bobby Tyler the gunsmith to the “Stars” has done his magic yet again with one of the new Colt Pythons. His crew at Tyler Gun Works has enhanced this handgun both internally and externally. It has been custom engraved and is not up for auction on gunbroker.com.

The proceeds will go to support the NRA Whittington Center’s Youth Adventure Camp. It is a great gun and is being used for a great cause. Please see the below information.

Obtained from Lipsey’s, the all-new Colt Python revolver made its trek to Tyler Gun Works in Friona, Texas. Bobby Tyler had big plans for this Python. With his hand-engraved scroll, engraver Dale Bass took this Python aesthetically to a whole different level, making it the first new production Colt Python to be engraved and authenticated with an official letter direct from Colt.

“A legacy dating back to 1955, the Colt Python was known as “the finest production revolver ever made” until it was discontinued in 2005. But after 15 years of anxiously waiting, the .357 Magnum snake gun is finally back!” This Colt Python …Read the Rest