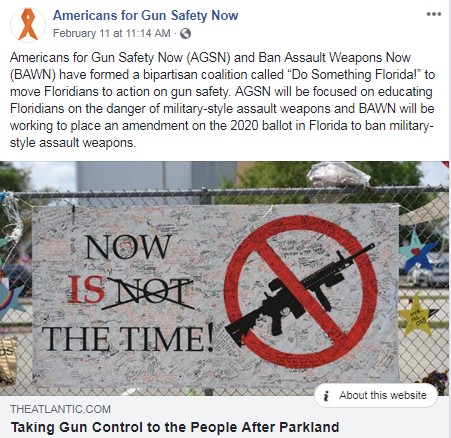 U.S.A. – -(Ammoland.com)- “[T]here is a push to pass an ‘assault weapons’ ban via a ballot initiative to amend the State Constitution,” a Monday Florida Shooters Network report warns. “This is being spearheaded by Ban Assault Weapons NOW (BAWN), a bipartisan group of gun-grabbers made up of Republican and Democrat authoritarians that want to see Floridians disarmed.”

“BAWN has partnered with the prominent Republican donor Al Hoffman and his gun-control-advocacy organization, Americans for Gun Safety Now!, which is made up almost entirely of Republicans who support an assault-weapons ban,” a cited advocacy puff piece masked as political reporting from The Atlantic notes. Here is what they want to do, at least for now:

“BAWN’s assault-weapons ban, which exempts military or law-enforcement members, would make possession of the defined weapons a third-degree felony. It would also give Floridians who already own these weapons a year to register them before their possession becomes illegal.”

And, of course, once registered, why should we believe the people who want them banned won’t press for Phase Two?

So who are these “Republicans”?

On the political scene, …Read the Rest