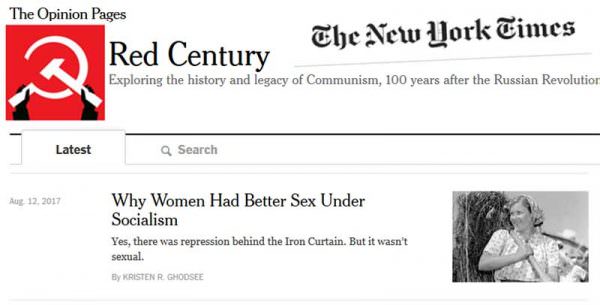 USA – -(Ammoland.com)- Newsflash from The New York Times: Women may have starved under socialist regimes, but their orgasms were out of this world!

That’s the creepy gist of one of the Grey Lady’s recent essays this summer hailing the “Red Century.” The paper’s ongoing series explores “the history and legacy of Communism, 100 years after the Russian Revolution.” When its essayists aren’t busy championing the great sex that oppressed women enjoyed in miserable Eastern Bloc countries, they’re extolling Lenin’s fantabulous conservationist programs and pimping “Communism for Kids” propaganda.

Since this is back-to-school season, it’s the perfect time to teach your children about faux journalism at the Fishwrap of Record. As the publication’s pretentious own new slogan asserts, “The truth is more important than ever.”

While the Times hyperventilates about the dangers of President Trump’s “art of fabrication” and “Russian collusion,” this is the same organization whose famed correspondent in Russia, Walter Duranty, won a Pulitzer Prize for spreading fake news denying Joseph Stalin’s Ukrainian genocide.

An estimated 10 million men, women and …Read the Rest