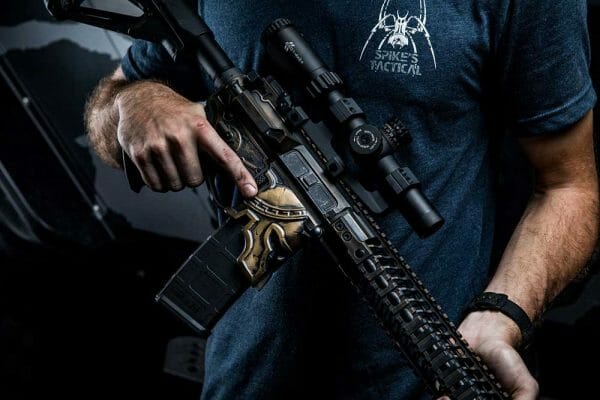 The Spartan lower receiver, which was leaked and later confirmed and announced by Spike’s Tactical in early 2017, is the first-of-its-kind to be designed and submitted to the U.S. Patent and Trademark Office (USPTO).

The lower receiver took more than a year to design and develop, features a Spartan helmet as the AR-15’s magazine well and is compatible with all standard AR-15 lower receiver parts.

The Apopka-based weapons manufacturer teamed up with Rare Breed Firearms to give gun enthusiasts more options when it comes to personalizing their AR-15s and believes consumers will enjoy the unique look of a weathered Spartan helmet in either black anodized or a custom Cerakote paint job.

“We’re excited to roll out this new three-dimensional Spartan lower receiver,” said Cole Leleux, general manager at Spike’s Tactical. “This design, and others to come, will turn any AR-15 into a one-of-a-kind weapon, which overthrows the status quo.”