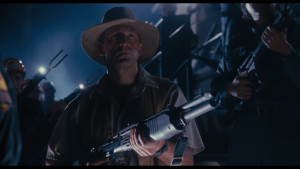 IIRC the hunter in the original film was using some sort of shotgun to go after the “velociraptors”, presumably loaded with rifled slugs. It seemed an odd choice to me – what do you think?

The professional hunter employed to control the dangerous stock in the first Jurassic Park movie was played by the late Bob Peck, an actor whom I always felt deserved more recognition for his work and talent. The gun knirirr mentions as being wielded by Mr. Peck in the film is known as the Franchi SPAS 12.

A fascinating design, the SPAS 12 could be set to fire either pump action or as a semi-auto. No longer manufactured, the importation of the gun into the US was banned in 1994. There were only about 1,800 of them shipped to America all told, and it would appear that a fair number were snapped up by the film studios to be used as props …read more