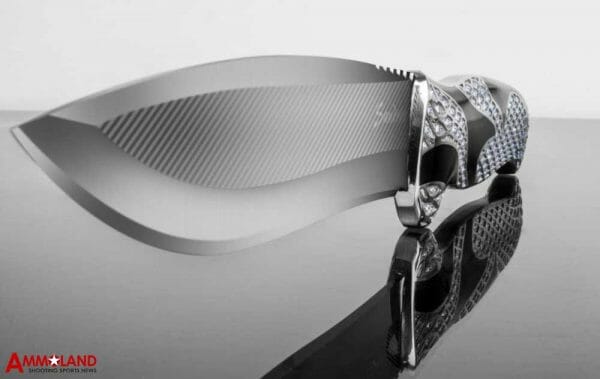 Tungsten Carbide-bladed Platinum Mamba is the ultimate in dangerous luxury, science, and craftsmanship.

TURIN, ITALY – -(AmmoLand.com)- Sandrin Knives in conjunction with Cabot Guns announced today that it is debuting the Platinum Mamba, a unique, collector’s edition knife featuring a blade of Tungsten Carbide, the world’s hardest and sharpest material.

The knife’s handle is made from three-quarters of a pound of Platinum encrusted with 320 diamonds (14 carats total) and inlaid with Wyoming Jade.

The opulent Platinum Mamba, offered at $150,000, is the ultimate in dangerous luxury, science, and craftsmanship. It is the first knife to feature a platinum handle and likely embodies the highest value of raw materials of any knife ever made.

“This is a knife fit for a king. It’s an outrageous beast of a knife,” said Alessandro Colombatto, President of Sandrin. “It has a presence. When you hold it in your hand, you feel its power and distinctiveness.” Sandrin produced the blade. Cabot Guns, Sandrin’s exclusive partner in the US, oversaw the team of artisans who created the complete knife. The two companies collaborated on the Platinum Mamba’s creation for two years.