Run, Hide, and … What Is The Last One Again? 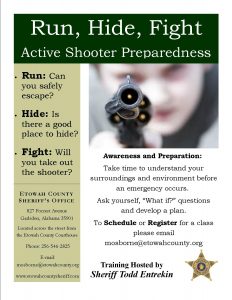 They made us watch the video below at work.

That video was produced by the city of Houston, Texas. They consider it to be so important that it is available in many languages, some rather surprising such as Chinese.

The video describes what to do if one finds oneself in an active shooter situation, where some nutbag decides to end his miserable and worthless existence by killing as many innocent, helpless people as possible before the police arrives and takes his pain away with a bullet. The three instructions to follow are RUN, HIDE, FIGHT.

These instructions are to avoid the shooter if at all possible, but if you can’t get away then to go down fighting. Just about every law enforcement agency here in the United States advocates the same thing. It is so common that even college police departments have their own videos to teach the students.

This is completely uncontroversial here in the United States, as it just seems to be gobsmackingly obvious. I’ve even come across at least one law enforcement agency that uses the possibility of being caught in …Read the Rest