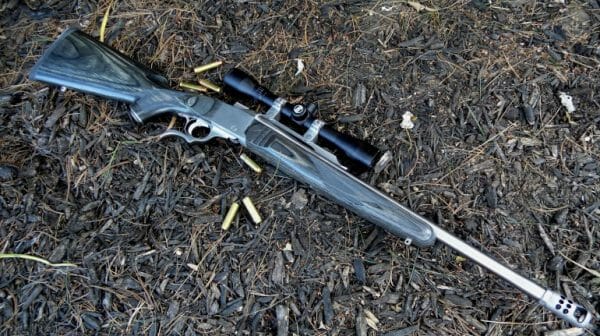 Grand Rapids, MI USA -(Ammoland.com)- In this fifth installment of my .450 Bushmaster series, I will be taking a look at a very interesting departure from what many think a .450 BM rifle to be: the Ruger No. 1. What makes this rifle special and different from other .450 offerings on the market today? Well, for starters it is a single-shot.

There has been a race for capacity when it comes to rifles these days. It is no surprise that this has lead to problems with many rifles, especially those in .450 Bushmaster. As I described in my previous articles, there are many significant problems associated with magazine-fed semiautomatics, mostly stemming from said magazines. Problems in reliability can shake a hunter’s confidence in his rifle, and I know a great many of frustrated .450 owners who lament that their ideal hunting cartridge won’t cycle in their ideal hunting rifle.

The simplicity of the single-shot rifle is hard to ignore in the context of hunting. Americans have a long and romanticized history with single-shots, going back to the Civil War era, which saw the widespread acceptance …Read the Rest