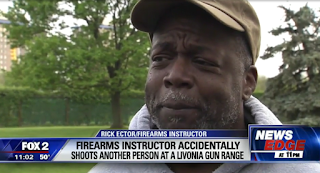 I recently did an interview with Fox 2 News Detroit about a local Firearm Instructor who had a negligent discharge that happened in his classroom.

I discussed how such a tragic incident could occur. Make no mistake about it – this incident should have never happened, Ammunition is not allowed in the classroom. So, it goes without saying that loaded guns have no place in the class either.

Click the link to hear my comments about this incident.

About The AuthorRick Ector is a National Rifle Association credentialed Firearms Trainer, who provides Michigan CCW Class training in Detroit for students at his firearms school – Rick’s Firearm Academy of Detroit.