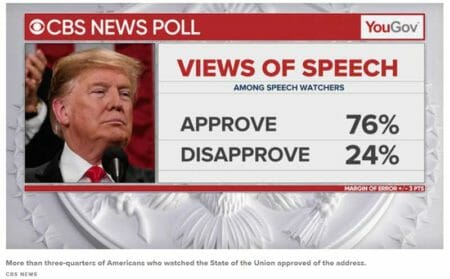 USA – -(AmmoLand.com)- President Trump’s 2019 State of the Union address was that kind of speech.

If you have not seen it, you should watch it online. Reading it will only convey 10 percent of its power. It was the interaction of the President with the members of Congress and the audience in the galleries that was so compelling.

The emotions of that night matched anything President Ronald Reagan achieved in his addresses to Congress. From the early mentions of people in the gallery – which were guaranteed to get even the Democrats to stand and applaud – to spontaneously singing Happy Birthday to a Holocaust and 2018 synagogue shooting survivor to chanting “USA! USA!,” the total performance and interaction with the members of Congress was vastly more powerful than the words on paper.

Furthermore, the delivery was presidential. The President interacted with the Democrats in a positive and cheerful way, which bodes well for bipartisan legislative initiatives the rest of this year.

By one count, the President was interrupted 98 times with applause. Both the left-wing Democrats and the never Trump Republicans found themselves standing and applauding again and again.

As a former Speaker of the House who …Read the Rest