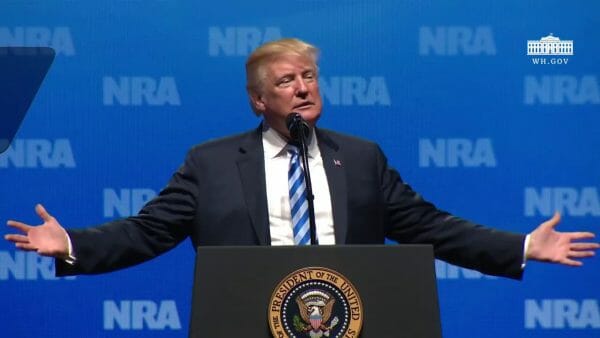 Oregon – -(AmmoLand.com)- Today President Trump unveiled his finalized form of his “bump stock ban.” In doing so he created countless new felons out of gun owners who have committed no crime, hurt no one and constituted no danger to anyone.

You can read the entire document here.

Persons who purchased these devices lawfully must now destroy them or turn them into the nearest BATF office. ATF, the same folks who assured buyers that these accessories were legal.

The ruling states the following:

“The Department acknowledges comments on enforcement of and compliance with the rule. As stated in the NPRM, current possessors of bump-stock-type devices will be obligated to dispose of these devices. Acceptable methods of destruction include completely melting, shredding, or crushing the device. If the device is made of metal, an alternative acceptable method of destruction is using an oxy/acetylene torch to make three angled cuts that completely severs design features critical to the functionality of the bump-stock-type device. Each cut should remove at least¼ inch of metal per cut. Any method of destruction must render the device so that it is not readily restorable to a firing condition …Read the Rest