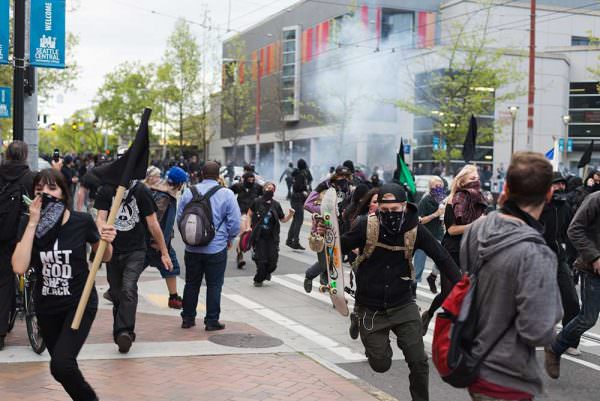 What was supposed to be a peaceful rally lead by Senate Candidate, Joey Gibson, and the Patriot Prayer group descended into what police describe as a riot when the alt-left group, Antifa, attacked the rally goers as they attempted their permitted march.

Police in riot gear was separating the two sides as the Patriot Prayer group gathered to prepare to march down Third Street in Portland, but once the march started members of the Eugene Antifa group began throwing rocks, m80s, and bottles at the peaceful marchers. Police declared the event a riot and ordered the two groups to disperse immediately.

“We seized numerous weapons early on, and interceded and separated people when necessary,” Deputy Police Chief Bob Day said in a statement released by the department. “However, once projectiles, such as fireworks, eggs, rocks, bottles, and construction equipment were thrown, and people were injured, we ordered people to disperse.”

At that point, the scene became even more violent with Antifa members pulling out batons and attacking members of the Patriot community who in …Read the Rest