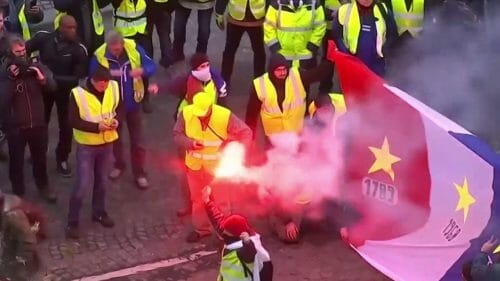 Paris, FR – -(AmmoLand.com)- “Who claim to have my best interests at heart and simultaneously suggest that I disarm and leave my personal safety in their hands, scare me motherless. Not merely hypocritical, but dangerously ignorant and delusional. They are true believers in false gods!” ~ Branson

This from a friend in Europe:

“On a recent Saturday, Paris police were dispatched to contain ‘yellow-vests.’ Police were overwhelmed almost immediately and lost control of Paris’ streets.

All they do now is try to protect government buildings (mostly unsuccessfully).

‘Police protection’ is unavailable in most parts of the City!”

Those who do not have the means to protect themselves can merely stand-by helplessly and watch their homes and property despoiled, stolen, burned, and themselves and families physically attacked, maybe murdered.

This represents an important ‘lesson’ for the disarmed French, Brits, and most other western Europeans, all of whom have allowed themselves to be disarmed and now foolishly rely upon progressively disintegrating “police protection.”

We’ll see it all again. They’ll be no let-up any time soon!”

“When the Cambrian measures were forming, they promised ‘perpetual peace.’
They swore, if we gave them our weapons, …Read the Rest