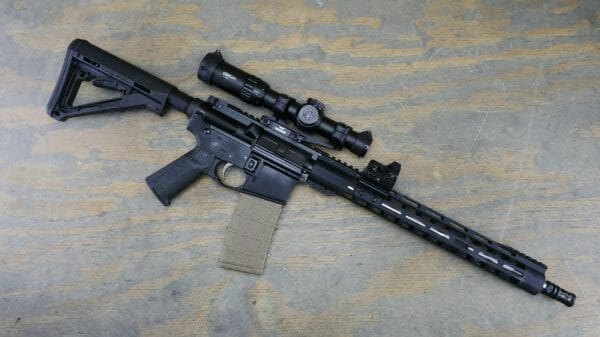 U.S.A. –-(Ammoland.com)- Not too long ago Ammoland Editor Duncan Johnson and I went to visit Palmetto State Armory’s numerous facilities. If you haven’t read the two posts about our visit, make sure to read both Part 1 as well as Part 2. As a part of our tour, we were allowed to build our very own Palmetto State Armory AR-15 in their assembly facility under the watchful eye of PSA’s top engineer.

What made me use some of the parts that I did? I had to use what was available, what was going to work with the 16″ Stainless Freedom barrel, and what I like on a rifle. I also went with a slightly unconventional optic setup because frankly, I wanted to try it out.

Let’s get the optics out of the way first, shall we? I selected a Vortex Strike Eagle 1-6 scope since I am rather familiar with the optic. I have one in a Warne mount just like this one on a beater rifle that I often reconfigure for reviews and another on the Ruger Gunsite …Read the Rest