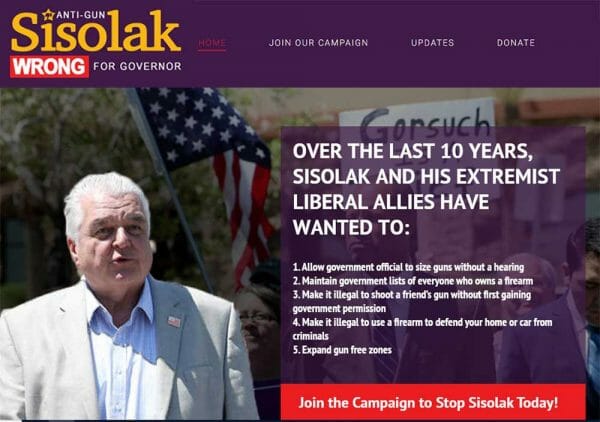 Nevada – -(AmmoLand.com)- The Nevada Firearms Coalition PAC announced Monday that they have unveiled their campaign to oppose Steve Sisolak for Nevada Governor at www.SteveSisolak.org. The campaign’s goal is to make sure every voter who seeks out information about Steve Sisolak has an opportunity to learn the other side of his gun-control agenda.

“In today’s political climate, you have to be loud, and when Steve Sisolak made the mistake of not securing all of his URLs, we saw it as an opportunity to make sure that voters could see all sides of Steve Sisolak and his gun-control agenda,” said Don Turner, President of the Nevada Firearms Coalition and their Political Action Committee.

“Steve Sisolak has made gun control a central part of his campaign, so it is essential that voters know that what he and his gun-control allies are really saying is that gun owners are guilty until proven innocent.”

The Nevada Firearms Coalition PAC’s campaign against Steve Sisolak for Nevada Governor includes yard signs and bumper stickers for supporters to help spread the word. They continue to seek donations with the goal of making sure every undecided voter in Nevada knows how Sisolak will treat …Read the Rest