Only Murderers Are Allowed to Be Amateurs 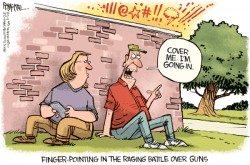 Even coverage of an attempted mass shooting successfully stopped by the NRA’s “Good guy with a gun” is not immune from the Opposition Media’s anti–gun agenda. One of the bedrock beliefs of the gun–grabber crowd is the average citizen has no need to own a gun, unless the weapon is strictly for hunting and safely stored somewhere in the Fortress of Solitude.

All other uses of firearms should be restricted to government–approved experts, criminals and random crazy people. Law–abiding citizens need not apply.

That’s why early reports on the shooting at the West Freeway Church of Christ — located in White Settlement, TX — made a big deal about the hero, Jack Wilson, being a “former FBI agent.” It fit perfectly with the experts–only mindset of the OpMedia. Both the Daily Mail and the CBS outlet in Dallas, to name but two, highlighted that description in early coverage of the event.

Verifying that someone actually was a “former FBI” agent shouldn’t be that hard and certainly should be part of the story. One could begin by asking Jack, himself. And a call to the FBI would also be in order to completely verify. Lord knows the FBI should be eager to cooperate if it was true. An ex–agent stopping a shooting would provide some much–needed positive PR for the tarnished, Comeyfied institution.

Since Wilson was a candidate for county commissioner, those reporters could’ve checked for a bio on his website. But “former–FBI” like “Russia collusion” was just too good to check. The good folks at AR15.com did and discovered Wilson was a former reserve deputy with the Hood County Sheriff’s Dept. Not a former FBI agent.

That revelation presented a real quandary. If there is one class of law enforcement the OpMedia despises more than police, it’s reserve police. Reserve officers, which include deputies, are usually unpaid volunteers who are frequently only required to attend abbreviated law enforcement training.

Snobby reporters view reserves as little more than vigilantes with a badge and certainly not someone decent folks would feel comfortable around if they knew reserves were armed.

The experts–only narrative was saved when it was learned that Wilson was also a firearms instructor and formerly owned a gun range. That’s why the WoePost ran the headline: “Firearms instructor took out gunman at Texas church service.”

A follow–up editorial in the WoePost asserted, “The hero in Sunday’s shooting was not, as gun advocates would want us to believe, an ordinary churchgoer …but rather a firearms instructor and gun range owner who has been a reserve deputy with a local sheriff’s department. It’s not hard to imagine an even greater tragedy if there had been someone less skilled than Mr. Wilson…”

A hysterical editorial page writer at USA Today’s AZCentral.com echoed that sentiment, “In other words, he’s exactly the kind of man you want around with a firearm. But we know nothing about the at least six other parishioners who also appeared to draw their handguns at West Freeway Church …And that’s terrifying.”

Mike ‘Big Nanny’ Bloomberg — Democrat presidential candidate and moneybags behind Everytown for Gun Confiscation — even weighed in. When asked about the shooting he opined that, “It’s the job of law enforcement to have guns and decide when to shoot. We just do not want the average citizen carrying a gun in a crowded place.”

In other words, Bloomberg’s message for the 247 members in the congregation when the random crazy person opened up with a shotgun was leave it to the experts.

Judging by the video of the shooting, Wilson has kept his firearms instructor license current. But in spite of what the credential–crazy media would have you believe he hasn’t been in law enforcement for over 33 years and his range closed in 2016. Wilson’s definitely better than the average bear, but he’s not John Wick.

And if Wilson had not been attending church that day, I’m guessing the congregation would have been happy if any of the other six armed parishioners had engaged the shooter. Particularly when the only other choice was to wait nine or more minutes for the experts to arrive.

It’s really not that complicated. People with concealed carry permits carry a gun because they’re too weak to tote a cop.

It’s been said time is money, but time is also life during an emergency. This idea that Americans can outsource their personal defense to the authorities is false. You are personally responsible for your family’s immediate safety. The gunfight inside West Freeway Church of Christ lasted only six seconds because the congregation had immediate responders who didn’t wait for first responders.

And that made all the difference.

Only Murderers Are Allowed to Be Amateurs is original content from Conservative Daily News – Where Americans go for news, current events and commentary they can trust – Conservative News Website for U.S. News, Political Cartoons and more.