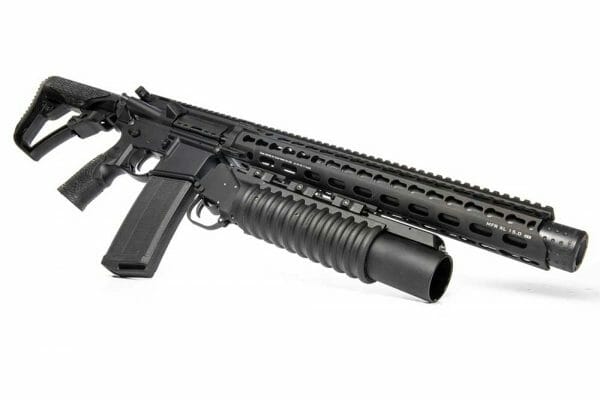 NFAFA is giving away to one lucky ticket buyer a Daniel Defense DDM4ISR [V2] integrally suppressed .300 Blackout caliber AR rifle along with an LMT L2B 40MM, rail mounted launcher, valued at over $6,000!!

“This is the most exciting giveaway we have ever done to support the efforts of the NFAFA”, said NFAFA Executive Director, Todd Rathner. “We wanted to make a real “BANG” to celebrate our nation’s independence and couldn’t think of a better way to do it.”

This DDM4ISR was donated by Silencer Shop and the LMT L2B 40MM Launcher was donated by Texas Machine Gun and Ordnance. Included in the package is an LMT Leaf sight, 5 chalk rounds, and one .22 Caliber “Behive” round that fires 10 .22 LR cartridges simultaneously.

Read the NFAFA filed comments on the BATFEs absurd proposal to regulate “Bump Stocks” as machine guns, which of course they are not. NFAFA BUMP STOCK COMMENTS.