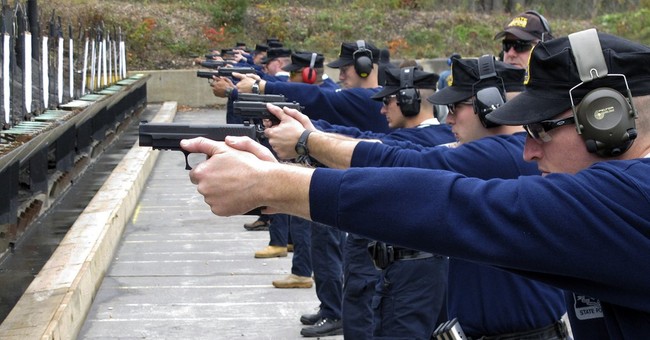 There are a group of people who have spent a lot of time demonizing police officers all throughout the nation. While police do make mistakes and that there are times when criticism seems completely justified, these folks don’t see individuals who may have screwed up or even departments that might represent a problem. No, they see anyone in blue as part of some bizarre brand of evil.

What’s hilarious is just how much overlap this group has with the crowd that wants the American public disarmed.

For the first time I’ve seen, a magazine that’s not aligned with the right is asking why would you want the “evil police” to be the only ones who have guns.

At Tuesday’s Democratic primary debate in Ohio, moderator Anderson Cooper asked Julián Castro how he’d end gun violence. Until then, the solutions put forth by his fellow candidates had focused mostly on implementing universal background checks, buying back some assault rifles, confiscating others, and banning their future sales. That most firearm deaths in America are caused by handguns went unmentioned. “What’s your plan to prevent those guns?” Cooper asked Castro. The former Housing secretary instead challenged the question’s premise, outlining the dangers …Read the Rest