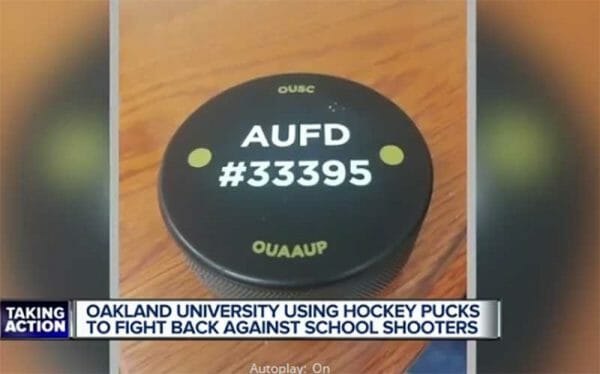 The Chief of Police at Oakland University in MI, oh so concerned about student safety, is arranging for the issuance of hockey pucks to students and staff! He assures them that throwing hockey pucks at armed felons will “cause a distraction.”

The only “distraction” the average VCA (violent criminal actor) may suffer in such a circumstance is uncontrollable laughter. This initiative, apparently proposed with a straight face, is yet another example of the inherent dishonesty and hypocrisy of liberals.

You can bet the chief (a self-described liberal) who is proposing this “feel-good” rubbish is not counting on a hockey puck to protect his own life.

But, he piously insists nobody else gets to have a gun. Mere peons only get hockey pucks, because their lives and safety are, in the end, unimportant.

Gun-carrying liberals who insist that the rest of us don’t get to carry guns. That is the very definition of hypocrisy.

The wise go armed and are well trained. That is what this chief should be proposing. But, with a typical …Read the Rest