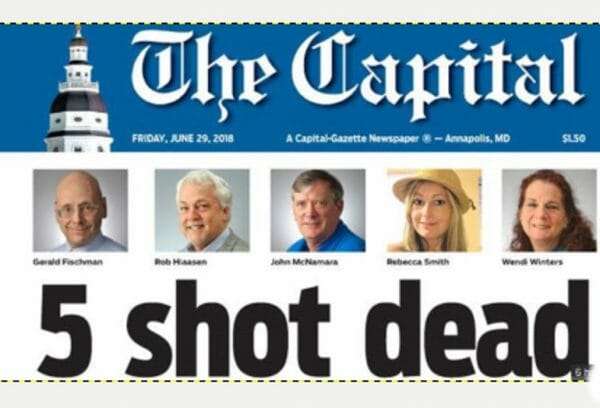 Arizona -(Ammoland.com)- Five people were murdered and two others were wounded in Maryland on 28 June, 2018. A lone murderer shot his way into the newspaper office of the Capital Gazette in Annapolis. Police response was swift, but it was not fast enough to stop the murderer before he put down his weapon and hid under a desk.

The entire state of Maryland is pretty much a gun free zone. No one at the newpaper was armed to oppose the killer. From wtop.com:

Officers were on the scene within two minutes of the first call about the shooting, Altomare said. Ramos was arrested by officers after he was discovered hiding under a desk.

Altomare said more than 300 officers from federal and state enforcement agencies descended on the scene of the shooting. There were no shots fired by law enforcement during the arrest.

Wes Adams, the state’s attorney for Anne Arundel County, told WTOP’s Neal Augenstein that Ramos barricaded the back entrance before coming to the front entrance, shooting out the front window and shooting into the newsroom.