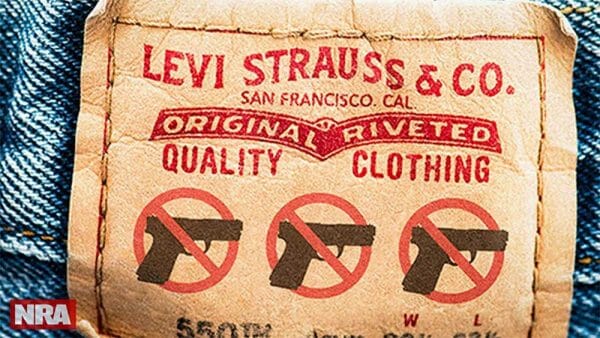 Fairfax, VA – -(Ammoland.com)- Levi Strauss & Co. established its brand in the mid-19th century by selling durable clothing to working-class Americans. As Levi’s signature jeans gained popularity amongst a wider set in the middle of the last century, the pants came to symbolize American freedom.

As Stanford Historian Niall Ferguson points out in his book, Civilization: The West and the Rest, during the Cold War, the American pants were so desirable behind the Iron Curtain that citizens would break any number of laws to obtain them. At one point the company even celebrated America’s armed heritage in a circa 1950 advertising brochure, “Levi’s Gallery of Western Guns & Gunfighters.” It’s with some irony then that Levi’s has abandoned this rugged image to team up with a billionaire oligarch in an effort to empower the government to trample upon the fundamental rights of the American people.

On September 4th, Levi’s CEO Chip Bergh announced that the San Francisco-based clothing manufacturer (which also owns Dockers) would openly advocate for gun control. As part of this campaign, the company will donate more than $1 million to radical anti-gun groups, including Michael Bloomberg …Read the Rest