Is the Radical Left Illegally Attempting to Influence the Rittenhouse Jury? 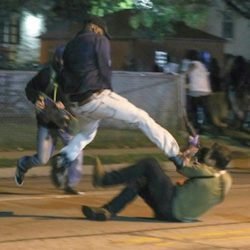 The jury in the trial of Kyle Rittenhouse has started deliberations a day after closing arguments from the prosecution and defense on Monday. Many in the media – including White House press secretary Jen Psaki – have recklessly weighed in on the trial.

Judge Bruce Schroeder ordered that no member of the jury will be sequestered “at this particular point.”

A misdemeanor weapons possession charge was dismissed after prosecutors conceded that the weapon was not short-barrelled before it was dismissed.

But with the not to sequester the jury comes the danger that members of the jury will be influenced by activists protesting at the courthouse and the race-baiting operatives in the agendized media.

Why This Is Important

Aside from the very real truth that we live in a nation with both a two-tiered and politicized justice system, we also live in a country where justice and the rule of law don’t stand a chance in the face of manipulative media and governmental apparatuses.

Those truths realized, we have to ask if today’s prevalent radically-Leftist ideological agenda is not actively attempting to trump justice and the rule of law in the Rittenhouse trial. If statements by forces on the Left are any indication the answer to that query would have to be yes.

From the White House to Congress to the mainstream media, statements tacitly meant to influence the American thought process on this trial indicate the Left has already determined what the outcome of this trial must be.

After stating she couldn’t comment on the Rittenhouse trial, White House press secretary Jen Psaki betrayed that notion and declared the President disavows “vigilantes patrolling our communities with assault weapons.”

Psaki made the insulting insinuation that “vigilantes” shouldn’t be “patrolling” our streets with assault weapons, saying, “We shouldn’t have opportunists corrupting peaceful protests by rioting and burning down the communities they claim to represent anywhere in the country.”

It is wholly disingenuous to infer that Rittenhouse (who insists he acted in self-defense) was the aggressor in an instance where protesters – couched as peaceful – committed verifiable acts of arson, looting, assault, and robbery. It flips reality on its head.

To add to the point that those in government have already made up their minds on what the verdict needs to be – regardless of the evidence introduced during the trial, hyper-Leftist US Rep. Cory Bush (D-MO), insisted that should Rittenhouse be acquitted, it would mark an open season for “White supremacists” to “shoot at us.” A more incendiary statement, given the situation, cannot be made.

Bush tweeted, “When we marched in Ferguson, white supremacists would hide behind a hill near where Michael Brown Jr. was murdered and shoot at us. They never faced consequences. If Kyle Rittenhouse gets acquitted, it tells them that even 7 years later they still can get away with it.”

I would suggest that if quizzed on the evidence introduced at the Rittenhouse trial, Bush would be completely devoid of the facts. To that end, her conclusion is irresponsible in the extreme given the emotional attitude of those outside the courthouse.

And adding fuel to the fire, Politifact – a so-called “fact checking” outlet, pigheadedly refused to correct a patently false claim it made in a fact-check of news about evidence submitted at the trail.

Politifact, deemed a Left-leaning organization by Media Bias Fact Check, issued a rating of “false” regarding a claim of it being “perfectly legal” for Rittenhouse to be in possession of his AR-15 sport rifle within the Kenosha city limits.

Yet, Politifact – a representative of the Leftist mainstream media in this matter, refused to acknowledge the court’s determination, saying in an addendum editor’s note, “These subsequent events show the grey areas of local gun laws – hardly a case of something being ‘perfectly legal.’ Our fact-check remains unchanged.”

Meanwhile, the jurors in this case, because they are not sequestered during deliberations and because of the relentless activism of the biased media coverage throughout, are being both overtly and covertly pressured to provide a “preferred verdict” regardless of the evidence presented in the court.

Now, in order for the jury to come to a decision, they will also find themselves weighing what will happen in the aftermath of their verdict. Because of this, the threshold for a pure and untainted verdict has been elevated to a level that compromises the rule of law.

Psaki, Bush, and the rest of the Fascists that believe the Constitution is a malleable and even an antiquated concept, are willingly and purposely ignoring the truth by disregarding the submitted evidence in this case. Instead, they project their vigilantism onto those with whom they disagree.

The Rittenhouse case is in the hands of the jury and I hope they are strong enough in their devotion to truth, to justice, to the American legal system, to ignore and in fact condemn the outside pressure that the activist malcontents are seeking to use to influence the rule of law.

If it is revealed that outside pressure influenced the verdict in this trial in any way – positive or negative, then the rule of law is dead in the United States of America. It the vigilante justice of pressure political activism is allowed to win the day, we are an anarchist nation; we are Thunderdome.

Is the Radical Left Illegally Attempting to Influence the Rittenhouse Jury? is posted on Conservative Daily News – Where Americans go for news, current events and commentary they can trust – Conservative News Website for U.S. News, Political Cartoons and more.