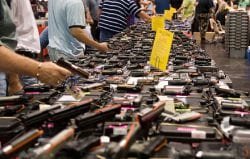 Gun sales massively surged in January as Americans continue to feel uncertain about the Biden administration and fear violence, The Washington Post reported.

An analysis of federal gun background-check data reveals more than 2 million guns were purchased in January, which equates to a year-over-year increase of 80% and the second-highest number of gun purchases in a single month on record, the Post reported.

The January surge has reportedly kept pace with national gun-buying trends in 2020, which broke records after more than 23 million firearms were sold, a 64% increase year-over-year, the Post reported.

Fear of violent riots, police effectiveness and the Biden administration’s pro-gun-control rhetoric, has played a major role in the surge of firearm sales across the country, the Post reported.

“With the lockdown and a president who is saying things like ‘gun reform,’ there’s a fear within the gun community and people that are responsible gun owners that they’re going to be made into felons just by nature of law,” Sam, who asked to be kept anonymous, told the Post.

In particular, President Joe Biden’s cabinet appointees have expressed support for pro-gun-control legislation in the past, including Susan Rice, Director of the United States Domestic Policy Council, who has called for universal background checks and a permanent ban on assault weapons as well as high capacity magazines.

Last November Biden pledged he would ban assault weapons and high-capacity magazines in a tweet.

“It’s long past time we take action to end the scourge of gun violence in America,” Biden tweeted.

It’s long past time we take action to end the scourge of gun violence in America.

A more common reason for the January surge has been growing distrust over the efficacy of America’s police, the Post reported. First-time gun buyers are reportedly purchasing firearms in record numbers out of fear that the police will be unable to effectively respond to a crisis.

“The folks that said they would never become a gun owner were trusting the police to protect them, and that delusion has been dispelled,” Steven Dulan, who teaches firearms law at Western Michigan University’s Thomas M. Cooley Law School, told the Post.

“People saw all of this happening at the same time, and they became very concerned for their safety,” Mark Oliva, public-affairs director for the National Shooting Sports Foundation, told the Post. “Everybody in America is buying these guns. I’m a 47-year-old White guy living in the suburbs of D.C. It’s not just people like me.”

Gun Sales Surge As Americans Continue To Feel Uncertain About Biden is original content from Conservative Daily News – Where Americans go for news, current events and commentary they can trust – Conservative News Website for U.S. News, Political Cartoons and more.