Gun–Grabbers Shoot Themselves in the Foot 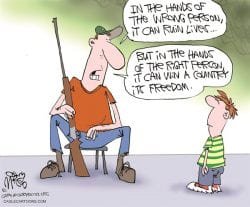 Hayley Peterson, of Business Insider, decided to buy a gun. She avoided going to a local gun store — presumably because employees are experts on the process — and decided to try Walmart, which is not known for employee expertise or visibility.

“I went to a Walmart store in Virginia with the intention of buying a gun as part of an investigation into the placement, selection, marketing, security and sales of firearms in Walmart’s stores.”

Hayley probably thought the only obstacle standing between her and looking like Yosemite Sam would be tracking down an employee to sell her the gun. Why the story practically writes itself: ‘Negligent, uncaring corporation forces employees with limited English skills to sell deadly weapons of war while working for slave wages!’

Only that’s not the way it worked out.

Her quest began as any experienced Walmart customer could have told her it would. After an hour and a half on the phone, “Three Walmart employees told me they didn’t know which stores sold guns.”

Hayley finally found a store with an arsenal only 30 minutes away. Her experience there was far worse than asking for a price check. She finds the gun case. She hunts down an employee. She waits for a manager. She listens as the manager tells her no guns today because an “authorized firearm seller” isn’t on duty.

Hayley returns Thursday. Her Walmart sells guns priced between $474 and $159 and no Walmart carries scary-looking ‘assault rifles.’ Times are tough in journalism, so she opts for the $159 model.

At that price point, she’s probably looking at a low–power, rimfire, .22 caliber rifle most gun owners would use to assault soda cans.

The authorized employee requests a manager oversee the sale. She pays $2 for a background check and starts filling out the form. The employee asks her if the home address on the form matches her Virginia driver’s license. Uh–oh. It doesn’t because she’s moved.

Pepsi cans breathe a sigh of relief because the addresses must match. She has to return with a government-issued document proving her current address.

A disappointed Hayley writes, “I left the store empty-handed — again.” Regardless of her initial motive for choosing Walmart, I give her credit for coming to a conclusion that didn’t fit the anti-gun narrative, “Overall, the experience left me with the impression that buying a gun at Walmart is more complicated than I expected, and that Walmart takes gun sales and security pretty seriously.”

After reading Gersh Kuntzman’s column on his ‘assault rifle’ adventure for the Daily News, I have the impression he would gladly have swapped places with Hayley.

Kuntzman wanted, “to fire and discuss the AR-15, a style of semi-automatic rifle popular with mass killers.”

It was a life-changing experience.

Gersh claims to have shot pistols before. It didn’t prepare him for his brush with Armageddon. “The recoil bruised my shoulder, which can happen if you don’t know what you’re doing. The brass shell casings disoriented me as they flew past my face. The smell of sulfur and destruction made me sick. The explosions — loud like a bomb — gave me a temporary form of PTSD. For at least an hour after firing the gun just a few times, I was anxious and irritable.”

That wasn’t the worst of it. “Even in semi-automatic mode, it is very simple to squeeze off two dozen rounds before you even know what has happened.”

I can see how that might occur if you’re panicked and hyperventilating because you’ve lost control of your bowels.

Gersh’s hysterical beta–male meltdown was so extreme I was ready to start a GoFundMe campaign to find a Y chromosome donor. Selwyn Duke, another columnist, contacted the range owner where Kuntzman had his brush with mortality.

Gersh’s barrage of death-dealing, psyche-altering, wholly destructive firepower consisted of exactly three rounds. That’s not even half the load of a limited California magazine.

I think Hayley would have been good for twice the rounds with none of the subsequent wailing and clothes rending.

It’s a positive development when journalists familiarize themselves with firearms to gain some insight into the technology and gun–owner culture. They can see first-hand the hoops legal gun owners jump through each time they want to buy a weapon. Perceptive reporters might realize none of the ‘sensible gun control’ measures will keep guns away from people who don’t obey laws.

Spend enough time around ranges and reporters would also learn any rational gun owner knows some people aren’t fit to own weapons because they are a danger to themselves and others.

I would put Kuntzman at the top of that list.

Gun–Grabbers Shoot Themselves in the Foot is original content from Conservative Daily News – Where Americans go for news, current events and commentary they can trust – Conservative News Website for U.S. News, Political Cartoons and more.