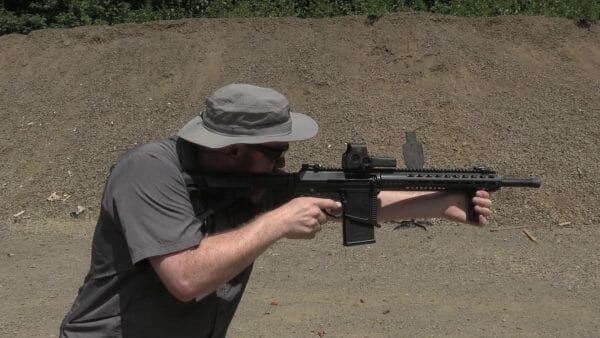 U.S.A. –-(Ammoland.com)- America’s rifle is loved for its versatility. The AR platform is one of the most modular options out there thanks largely to an immense after-market industry. Those looking for more oomph than the standard 5.56mm variety have been gravitating to the AR-10. The AR-10’s larger frame and beefier bolt capacity open up the possibility for a larger variety of calibers. Thanks to the genius of Genesis Arms, that variety now includes one of the world’s most versatile cartridges, 12 gauge.

While the prospects of a 12-gauge AR are exciting, it’s certainly far from mainstream. In the past it was believed that the AR-10 platform was difficult enough to make reliable in its original .308 caliber. Modern makers like Stag with its 10S and DoubleStar with its 10B have changed that. With optimism, I slapped the Gen-12 on my DoubleStar lower and before anything else wanted to know does it work?

As with most semi-auto shotguns, light loads are the worst enemy. As seen in the video above the only loads I found to not run 100% …Read the Rest