Five Of The Most Powerful Handguns In The World 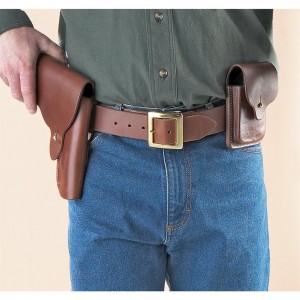 It seems as though my past post on hunting dinosaurs is still causing some to consider the premise. A quote from an email I received …

“So you have written about which rifles you would use to shoot dinosaurs. What sidearms would you carry?”

Handguns fill many roles, but their main purpose is to provide a portable, go-anywhere self-defense tool. Long guns will do better in just about every other job.

Still, it is prudent to consider what will happen if your long gun fails in some way. Best to have a handgun holstered at your hip in case you really, really need it.

Since the premise is to go toe-to-toe with extremely dangerous game, it would be a good idea to invest in high powered handguns that pack a respectable punch. But where is the line between “powerful” and merely ordinary?

The most common military and police caliber in the free world today is the 9mm Parabellum, and a standard pressure load with a standard weight bullet produces around 360 ft/lbs of muzzle energy. A cartridge much admired in the United States amongst shooting sports enthusiasts is the .45 ACP, and it …read more