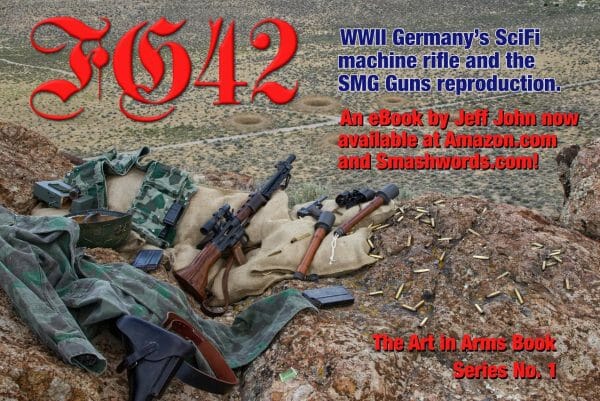 USA – -(Ammoland.com)- “Germany’s Fallschirmjägergewehr 42 advanced the infantry rifle from the slow, stodgy, 19th Century bolt action to a Science Fiction-era “machine rifle” in one step,” author Jeff John observes. That and the SMG Guns reproduction of “this unique and nearly forgotten WWII classic” are the subjects of his new book, “FG42,” the first volume in his planned “The Art in Arms Book Series.”

It’s “A study of WWII Germany’s innovative FG42, a technological breakthrough taking the primary infantry rifle from a slow-firing pre-1900 bolt-action rifle to an ultra-fast machine rifle capable of spitting out 900 rounds per minute,” John tells us. “The battlefield superiority the FG42 offered was lost on post-war arms designers who ignored its valuable lessons. Included is an in-depth review of the SMG Guns semi-auto replica of this remarkable rifle. FG42 is written for arms enthusiasts, reenactors and students of the Second World War.”

A word of disclosure is appropriate before proceeding. I worked for Jeff for almost 20 years, beginning with his tenure at Guns & Ammo as Associate Editor. He let me follow him over when he was named Technical Editor for …Read the Rest