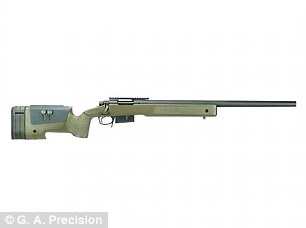 The Daily Mail reports that an FBI agent’s sniper rifle was stolen from a car parked in front of his hotel in Salt Lake City a few days before President Obama was scheduled to speak there. The gun was inside a hard rifle case and was ‘secured properly’ to a truck safe with padlocks and chains while the car was parked at the Marriott Springhill Suites, according to police . . .

Police believe the thief stole the rifle by breaking the rear right passenger-side window, tying a rope around the rifle case’s handle or a cable lock, and using the momentum from another vehicle to then break the case’s handle free from the lock.

The window frame of the agent’s car was pulled from the door, which police believe could indicate the large case was ripped through the shattered window.

‘There are all kinds of ways the weapon was secure. Yet someone was able to forcefully take the weapon.’

Before I drove off to college, I was cautioned by my parents about dallying too long with a car filled with most of …read more