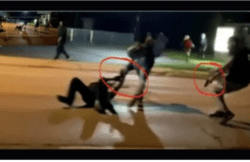 A forensic specialist provided the clearest drone footage yet on Tuesday of the Joseph Rosenbaum shooting in the trial of Kyle Rittenhouse.

The footage, presented by forensic imaging specialist James Armstrong, appears to show Rosenbaum pursuing Rittenhouse to a black car in a parking lot before the then-17 year old abruptly turns and fires at Rosenbaum with his rifle on Aug. 25, 2020. Rittenhouse then circles back around the cars to where Rosenbaum fell.

Armstrong told the jury he had received the new footage on Sunday.

Dr. Doug Kelley, a forensic pathologist at the medical examiner’s office in Milwaukee County, testified that Rosenbaum was shot four times. Rosenbaum would sustain injuries in his hand, thigh, and groin, as well as his head and back.

Witnesses from the night of the shooting described Rosenbaum as “extremely aggressive,” with military veteran Ryan Balch, who was with Rittenhouse at the time, stating that Rosenbaum threatened to kill Balch and Rittenhouse.

The Daily Caller’s Richie McGinniss, who witnessed the shooting, testified that Rosenbaum “…said f**k you and then he reached for the weapon.”

Rittenhouse is charged with reckless and intentional homicides in the killing of Rosenbaum, 36, and Anthony Huber, 26, and attempted homicide for wounding Gaige Grosskreutz, now 27, with a bullet to the arm. He has pleaded not guilty on all charges.

Drone Footage At Rittenhouse Trial Reveals Clearest Footage Yet Of Rosenbaum Shooting is posted on Conservative Daily News – Where Americans go for news, current events and commentary they can trust – Conservative News Website for U.S. News, Political Cartoons and more.