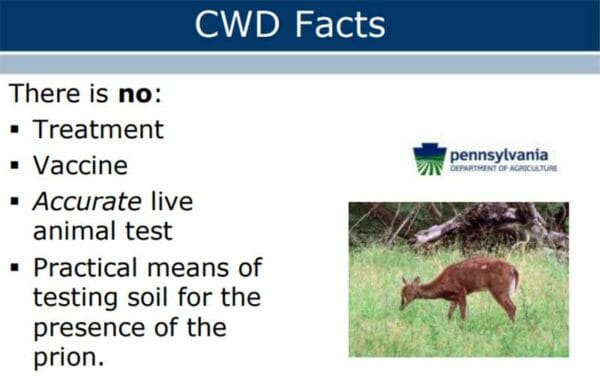 The exact adjusted boundary of DMA 3 and all other DMAs that could expand due to newly detected CWD-positive deer will be announced in coming weeks, after all samples collected from 2018 hunter-harvested deer are tested. About 3,000 of 6,309 samples from hunter-harvested deer remain to be tested.

The Pennsylvania Department of Agriculture last week announced a buck on a hunting preserve near Curwensville in Clearfield County tested positive for CWD.

The CWD-positive buck had been brought to the Clearfield County hunting preserve from a Fulton County captive-deer facility, where it was born and raised. The state Department of Agriculture placed the Clearfield County hunting preserve and the Fulton County captive-deer facility under quarantine and they are to remain under quarantine for five years.

While the new DMA 3 boundary will be announced after all sampling of hunter-harvested deer is final, the CWD-positive captive deer would expand DMA 3 to the northeast, where …Read the Rest